“Thousands have lived without love, not one without water.”

Undoubtedly, water is life. No second opinion regarding this. Life is unimaginable without water.

There are a huge number of people deprived of clean water coming straight from their taps. The increasing population has resulted in the unavailability of enough clean water resources from rivers to suffice the need of the growing population. So now, water has to be collected from other sources to fulfill the needs. Wells are a major contributor of water after rivers for potable uses.

Is well water even safe for drinking?

The hazards of excessive intake of certain minerals through water are prominent, including calcium carbonate that can scale your utensils and make water appear translucent, fluorides can seriously damage bones and discolor teeth as well as nitrates can make your immune system weaker. Sulfur present in the form of hydrogen sulfide and iron ions present give water a very pungent odor that feels like that of a rotten egg.

How to treat well water to make it POTABLE WATER?

Hard water can be converted into soft water. Well water is cleaned by different ways to get rid of the unnecessary metal ions present. Methods generally include either the precipitation of the minerals or elimination by using impermeable membrane.

Methods of the removal of sulfur and iron from well water

Iron and sulfur removal from the well water does not only improve the taste and odor of water but also prevents well water from rusting the pipes, corroding silver utensils and staining laundry. Also, the health threats with the massive heavy metal intake are prevented. The best possible ways to remove these ions from well water are discussed below:

1. Use of metal chelators 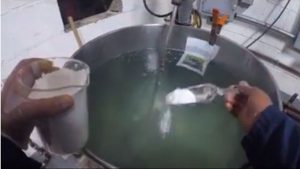 Metal chelators like EDTA are used to bind metal ions with it so that they remain in bounded form and remain unavailable as free ions in water that contribute to pungent odor and taste. It can form bonds to a metal ion forming a complexion or coordination compound. The complex is quite stable, making it impossible for any kind of reaction whatsoever possible before. When they are bound, they can’t have any effects on the body and they are removed from the body. So, chelators can be added in water to clean it.

Chlorination is a cheap and effective method of the removal of sulfur and iron ions from the water. Odorless Bleach is used as a source of chlorine which can remove ions very effectively since direct use of chlorine gas is very hazardous for health.

So, it’s better to introduce bleach in an adequate quantity into the water tank and allow it to react with water for a period of time (usually 24 hours) so that it can have sufficient time for exposure with water to remove sulfur and iron ions effectively.

But this procedure has to be repeated again and again after every few days since chlorine’s effect diminishes after some days. 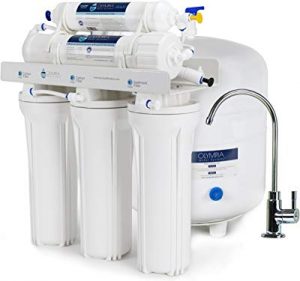 Reverse osmosis, microfiltration, nanofiltration, etc are all types of water filtration systems that can remove the targeted ions from water, as it consists of a membrane that allows only selected ions to pass through it on the basis of a specific size range of the ions to be removed. Hence, to remove sulfur and iron from water, one has to set up the desired whole house purification system for well water that can separate out the sulfur and iron ions from water, thus making the water softer and fit for drinking purposes. Once setting up such a filtration system, one would get a state-of-the-art system that ends worries about water quality.

4. Use of Aeration system

It is basically the exposure of air onto the well water so that it can replace the hydrogen sulfide present in water with oxygen ions.

It just needs an aeration unit between the well and the water storage tank. 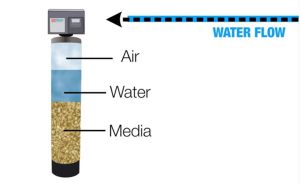 It is a type of bed filtration process in which a bed of magnesium dioxide i.e. greensand is used that releases oxygen.

The iron ions present in well water react with oxygen and forms a ferric oxide compound that is trapped in the bed. It is also helpful in the removal of hydrogen sulfide and manganese apart from iron, by oxidation and precipitation process.

The precipitates trapped in the bed can be then removed, resulting in clean and odorless water.

Activated carbon filters have the tendency to absorb hydrogen sulfide present in the water but have a very limited capacity for major odor absorption.

Carbon filters commonly are installed under the sink to treat drinking and cooking water. The filters must be changed after some time due to clogging of the filter bed.