Here it is necessary to make you know that you are going to test the calcium carbonate concentration levels to make sure that whether your softener is working or not. The concentration level is measured in ppm or mg/l. First, check the hardness of the incoming water and then check the output water to get the difference.

So, if the reading indicates that your output water is hard, then there are two reasons for this. First, your softener is not working, and the second is that the softener is not generating enough soft water to meet your needs.

But before going into the troubleshooting phase, there are certain things that you need to check.

Things to Look at Before Going Into the Troubleshooting Phase

Softener Should Be Plugged in

First of all, make sure that your softener is plugged in. Make sure that the outlet is not turned off. Also, check the display of the unit, whether it is active or blank.

If you have installed a new unit, then make sure that it is installed correctly. Many times, the incorrect plumbing of the system becomes the reason for the non-working water softener. 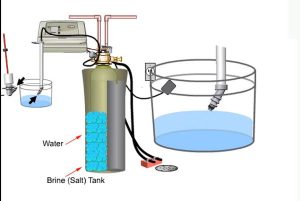 Check your brine tank to ensure that it contains enough salt. Also, sometimes, the salt bridge forms at the bottom of the tank. So, never forget to check that hard salt crust. If it is there, break it.

Check the Position of the Bypass Valve

The Valve Is Recording the Water Flow

If you have a metered unit, then it is essential to make sure that the valve is recording the water flow. You can check this by opening any faucet that is near to you.

Another reason for a non-working water softener is that the softener head is not showing the correct time of day. This happens mostly when the softener experiences a long power outage. If the display is reading the wrong time, then you have to adjust it.

Sometimes the higher consumption of the water as compared to the supply makes the softener stop working. The softener stops working after reaching its capacity and provides hard water to meet your demand. And when the scheduled time comes, it begins to make the water soft.

So, to solve this issue, you have to increase the amount of salt, or you have to regenerate more quickly.

But after doing everything, if your softener is still not working and you are not getting the soft water, then it is time to go for the troubleshooting.

Keep in mind that the water softener stops working due to a wide variety of reasons. Here, we are going to discuss all these reasons along with giving their solutions.

Water Softener Is Not Regenerating

If your water softener is not regenerating, then there are various causes of it: 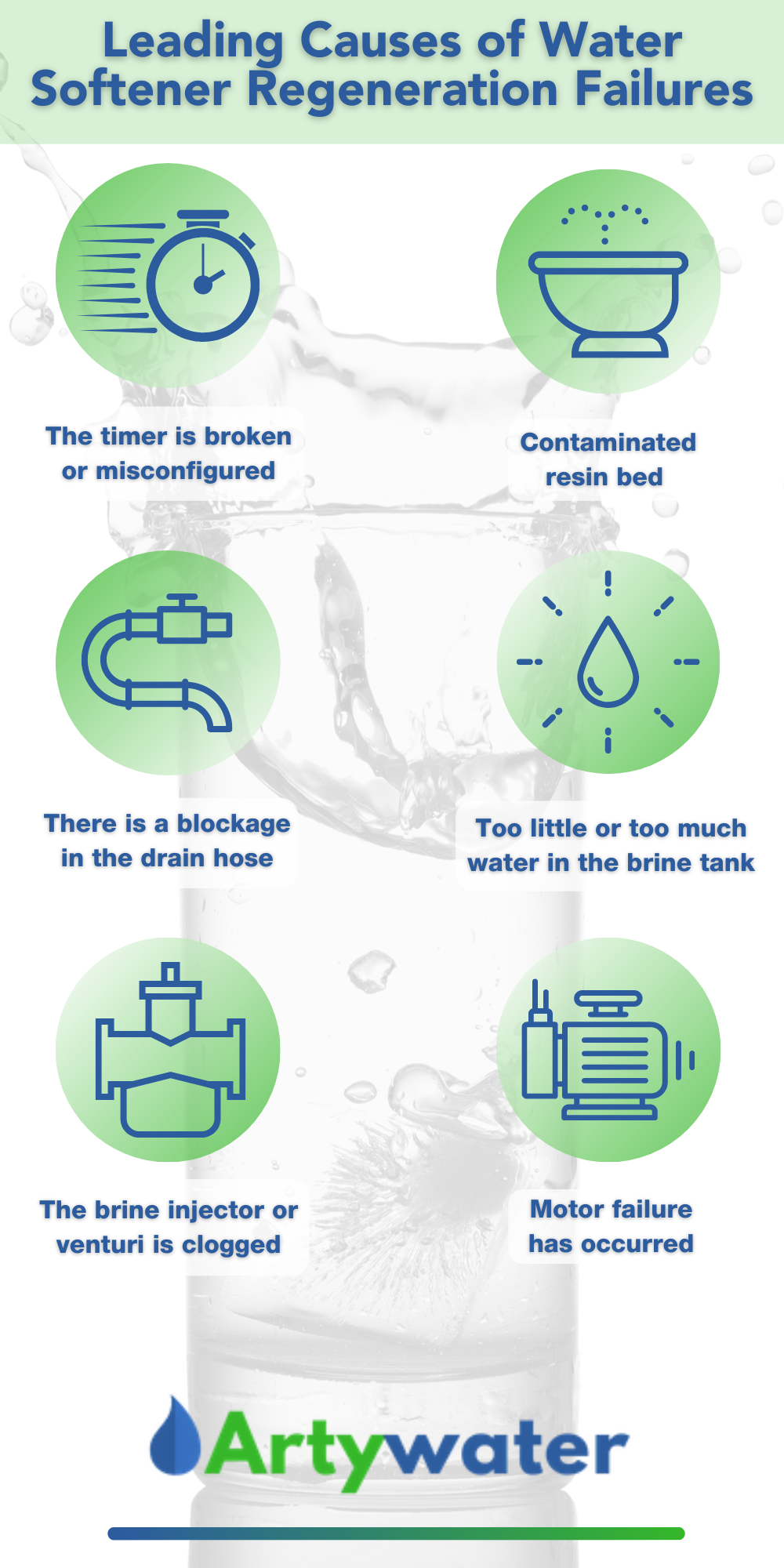 To make sure that you have a broken timer, first of all, set the regeneration cycle to daily. By doing this, your system will be recharged the following day or night. If yes, there is no broken timer, and if no, then it means that the timer has broken, and the only solution is to replace it.

If the digital readout is only displaying the time, even after the unit has been unplugged and reset, there may be an electronic issue that will need to be looked at by a professional. Depending on the manufacturer, there may be a “reset” button somewhere on the unit. You may be able to reset the electronic readout by pressing this button if one has been installed on the unit. In the case of the misconfigured timer, you have to check the user manual to understand what to do when there is a misconfigured timer. Check all the settings thoroughly.

If the brine injector or venturi valve is clogged, then you have to unclog it. Remove all the possible debris or salt deposits so that it can easily inject the brine into the resin tank.

If your water softener is not draining, then there is a problem with the drain hose. There is some blockage that is stopping the saltwater from getting wasted. Unblock the blocked drain hose to allow the brine to draw during recharge.

Also, make sure that the drain hose is not in an elevated position. If it is, then readjust its position to allow the unit to drain properly.

Once in a blue moon, the motor of the water softener fails. But if it does, then the only solution is to replace it.

Designs of water softeners can vary, but most are largely automated. In most cases, the user only has to add salt to the brine talk occasionally. However, the brine tank may not refill for various reasons:

Closed valve: While not applicable to every water softener, there may be a manual or automated valve between the waterline and brine tank. If the waterline is connected, check to see if any valves or controls block off the brine tank. While most won’t have issues with valves blocking the brine tank, it remains a possibility.

Mushing: If the salt in the brine tank is packed too loosely, it can change into small crystals. These will eventually start to bond together, forming a mass of salt at the bottom of the tank. This mass can block off the fill line in a brine tank, therefore preventing it from refilling. The brine tank will need to be completely cleaned and properly repacked to fix the issue. Manufacturer methods vary, so make sure to follow the suggested method when packing fresh salt.

Moreover, check the brine line and the valve. If there is a blockage, then you have to remove it.

Excess of Water in the Brine Tank / Water Softener Is Overflowing

Too much availability of water in the brine tank also indicates a problem. Too much water also stops the softener from doing proper recharging. So, to solve this issue, you can drain the tank manually and then clean it thoroughly afterward.

Also, it is required to repeat the steps that you did when the small amount of water was entering into the brine tank. Check the float switch, brine valve, and the brine tube.

Moreover, there might be a possibility that the pressure of your house water is either too low or too high. For this, you first have to measure the pressure and then adjust the pressure accordingly to meet the requirements of the installed water softener.

Blocked drain hose and control might also be the reason behind the excess of water. Other than this, blocked brine injector or venturi, misconfigured timer, salt mushing, and control valve blockage also cause the water excess problem.

Water Softener Is Not using Salt

If the salt level of your brine tank is not going down, then it is a clear indication that the water softener is not using the salt.

The reason for this is salt bridging. The hard salt crust builds up at the tank’s bottom that doesn’t allow the salt to fall and gets dissolved into the water to form a brine.

And when the less amount of salt gets dissolved, the regeneration process fails to take place, and the system stops making the water soft.

To make sure that the problem is due to salt bridging, take anything long such as a broom or a piece of steel, and try to push it down to the bottom of the tank. If you fail to reach the base, then there is a bridge.

Now, to solve this issue, you have to break the bridge. Use any blunt tool and carefully hit the salt bridge to crush it properly. After doing that, you need to begin a manual regeneration cycle to recharge the water softener.

Water Softener Is Not Softening the Water

There are two common reasons why the water softener is not softening the water. First, the control valve is set incorrectly. The second reason is the salt bridging or salt mushing.

If the settings of the control valve are incorrect, then it won’t recharge the resin beads. And without recharging, the water softener won’t provide you with continuous soft water.

Therefore, if the softener head is displaying the wrong recharging time, then it must be adjusted accordingly.

For the second reason, we have discussed the salt bridging earlier. So let’s move on to mushing.

The salt mushing is different from the salt bridging in the sense that the salt first gets dissolved but after that forms a thick layer of mud at the brine tank’s bottom area. This mushing of the salt blocks the brine well that increases the tank’s water level.

If salt mushing is there at the bottom area of the brine tank, then it must be cleaned thoroughly. Break up the mush and remove it from the container. Then clean the tank properly to fill it again with the water and salt.

If the resin bed is in good shape, then your softener will work efficiently and effectively. But if it is not, then you are very near to face some serious issues.

Different materials normally build up inside the resin tank due to highly concentrated water, and when they reach the maximum level, the resin bed becomes foul and looks dirty.

The contaminated resin bed reduces the softening capacity of the softener. Also, it changes the taste and smell of the water. Moreover, the water looks cloudy and even loses its color.

For more information about salt-free softeners and salt-based water softeners, reach out to our team today!