Every one of us uses the word “evaporation” in our daily routine. For a simple recap, evaporation is the process of conversion of liquids into a gaseous state. Water evaporation means the water is converted into the gaseous state by boiling. Temperature and pressure are the factors which speed up the evaporation process, though pressure may influence the process slightly, temperature plays a significant role in the evaporation process. If you leave water in a pot, it takes weeks or months to evaporate; if the same container is heated and the boiling temperature is reached, the water in the pot will evaporate in just 10-15 minutes.

Why is Evaporated water so clean? 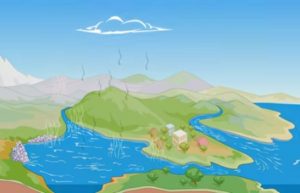 The water which flows out of your taps contains a lot of other things along the water, such as bacteria, sediments, total dissolved solids, and other contaminants as well. If you take this water in a boiling pot and start to heat it, you will notice that gases begin to form and escape the pot.

This is a natural process that you notice every day. What actually happens is that the bacteria are killed pretty soon, and then the water starts to boil and convert into a gaseous state. The rest of the impurities in the water, like heavy metals and other sediments, have a high boiling point higher than water. They stay in the water and do not evaporate.  The resulting stream of vapors contains nothing but pure water molecules. This stream does not even have the necessary healthy minerals in your water.

The evaporated water is so pure because the bacteria are killed, sediments are left in the pot, and the gaseous stream contains pure water.

Can you drink Evaporated Water?

Yes, you can drink evaporated water, but keep in mind that it will not have any minerals in it, and its taste may seem a bit awkward to you because it will only be pure water, and we are not used to drinking water without being treated. Drinking evaporated water is fine, but getting it in large amounts is not possible. We will explain this in the following section.

How to Get Evaporated Water? 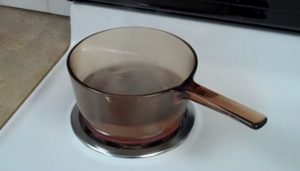 On a commercial scale, getting evaporated water is easy because of the heavy machinery and boilers they use to reach the boiling temperature for large containers of water. They can easily trap the gaseous stream and cool it down to get pure water.

Domestically, you can use this concept for an experiment or your kid’s science project at the school. It is not viable commercially to get evaporated water for drinking purposes because of the large amount of energy needed to create a small amount of water from vapors. You would also need other equipment to complete the process, and all that equipment costs very much. It will consume a lot of your time, as well.

Conclusion – How to get Pure Water?

The best way to drink pure water is not to get through evaporation, but by using a water filtration system. You can use a 3-stage water filtration system to get rid of all the contaminants in the water. For a more effective water filtration system at your home, use a reverse osmosis water system. RO system produces water, just like evaporated water. Most of them come with a re-mineralization stage to add up the minerals lost in the RO stage. RO membrane is so small that it allows only water molecules to pass through and stops everything else, just like the gaseous stream contains nothing but pure water. A re-mineralization stage helps in putting back the necessary healthy minerals in water to give you pure and healthy drinking water.

Also read: Question: Can you drink Distilled Water? – its Side Effects uses and more